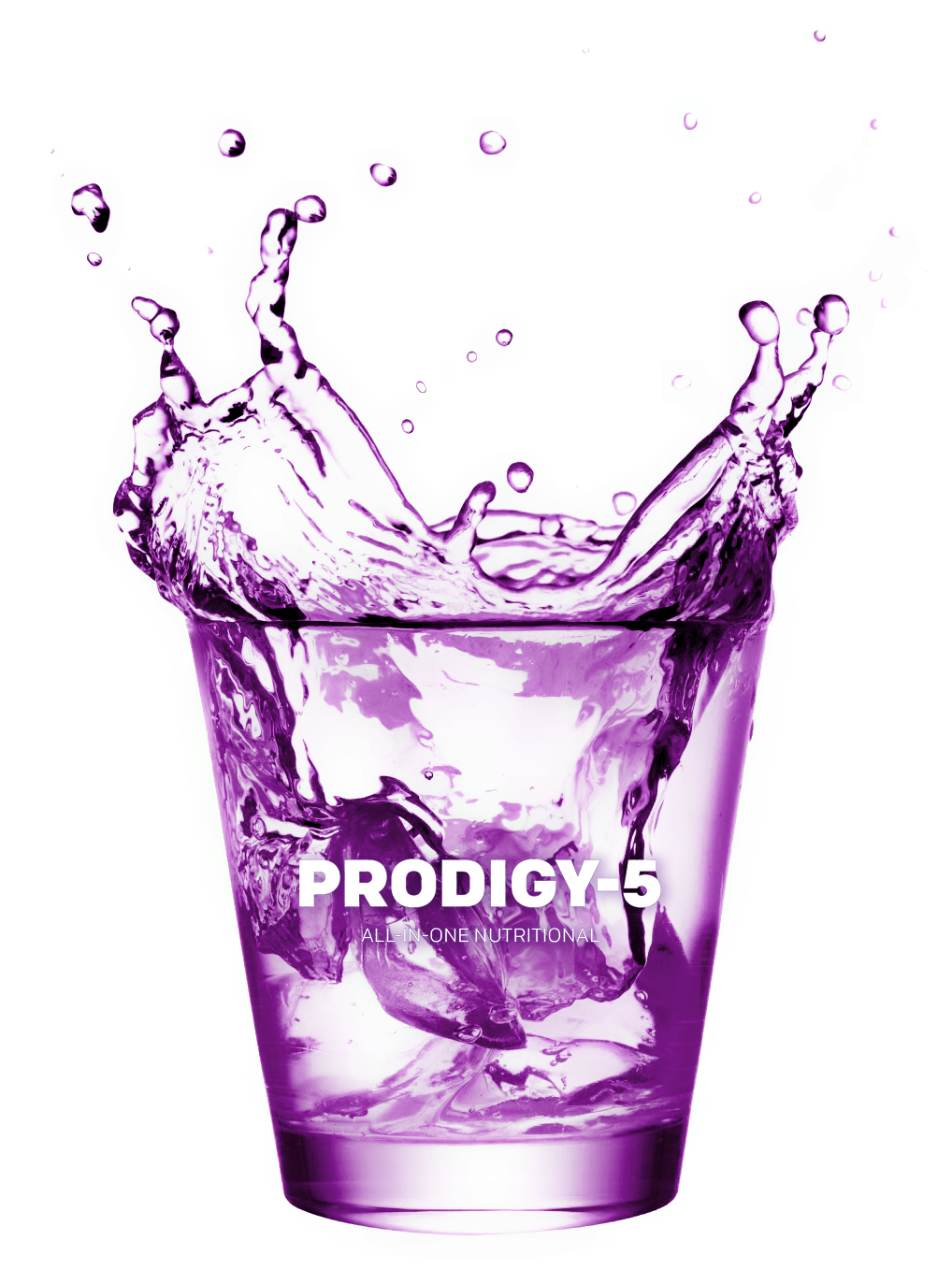 Prodigy-5 tartalmazza: A vitamin (Beta-Carotene) természetes antioxidáns. It belongs to a class of pigments known as carotenoids which include the yellow, red and orange pigments that give many vegetables and plants their coloring. Vitamin A has been found to enhance immune system functions by supporting and promoting the activities of white blood cells as well as other immune related cells. It also helps to inhibit free radicals and their damaging effects which have been associated with arthritis, heart disease and the development and progression of malignant cells (cancer). Beta-carotene is a precursor for vitamin A (approximately 6 mg of ß-carotene = 1 mg vitamin A). Beta-carotene is best known for the body’s ability to convert it into retinal, which is essential for good vision and visual health, skin, and immune functions.
Natural sources of beta-carotene include carrots, pumpkin, sweet potato, spinach, kale, collard and turnip greens, and winter squash.

According to the National Institutes on Health, the average adult male should be getting 900mcg of vitamin C each day. Females should be getting 700mg a day. Individuals with special needs (women who are pregnant, smokers) may have different requirements and should consult their health professional.

Prodigy-5 contains: Vitamin B1 (Thiamin) is a water-soluble B-vitamin involved with many cellular functions including carbohydrates metabolism, break down of amino acids, production of certain neurotransmitters and multiple enzyme processes (through the coenzyme thiamin pyrophosphate, or TPP). Thiamin can be found in small amounts in a wide variety of foods. Pork, sunflower seeds, yeast, peas and wheat are a few examples. Very little thiamin is stored within the body and must be consumed on a regular basis. A deficiency may result in weakness, loss of appetite, nerve degeneration and irritability.

Prodigy-5 contains: Vitamin B2 (Riboflavin), like most B-vitamins, is involved in many cellular functions. Riboflavin is important in energy metabolism, folate synthesis, conversion of tryptophan to niacin and acts as important coenzymes (FAD/FMN) involved in many reactions. It can be found in liver, mushrooms, spinach, milk, eggs and grains. Because it is water-soluble, there is minimal storage of riboflavin within the body and when dietary intake is insufficient, deficiency can occur (usually accompanied with other vitamin deficiencies).

Prodigy-5 contains:Vitamin B3 (Niacin), also referred to as nicotinamide and nicotinic acid, is another water-soluble, B-vitamin involved with energy metabolism. The coenzymes of niacin (NAD/NADH/NADP/NADPH) are necessary for ATP synthesis (the body’s main energy source), synthesis of fatty acids and some hormones and the transport of hydrogen atoms. When niacin levels are low, the body can use L-tryptophan (an essential amino acid) to manufacture the vitamin. This process is not ideal, however, as it can rapidly deplete L-tryptophan in the body and take away from its other needs such as maintaining optimal levels of serotonin and melatonin. Niacin can be found in grains, liver, fish and chicken.

Prodigy-5 contains: Vitamin B6 is a water-soluble vitamin which plays a variety of important roles in numerous biological processes. Humans cannot produce vitamin B6 so it must be obtained from the diet. Adequate sources of B6 include meats (salmon, turkey, chicken) and whole grain products, such as spinach, nuts and bananas. There are three forms of vitamin B6: pyridoxal (PL), pyridoxine (PN) and pyridoxamine (PM). Pyridoxal-5′-phosphate (PLP) is the principal coenzyme form and has the most importance in human metabolism. It acts as a cofactor for many enzymatic reactions involving L-tryptophan, including L-tryptophan’s conversion to serotonin, an important neurotransmitter in the brain. Pyridoxal-5′-phosphate is also involved in other enzymatic reactions where other neurotransmitters, such as dopamine, norepinephrine and gamma-aminobutyric acid (GABA), are synthesized. This plays a critical role in the functions of the nervous system.
Regarding cardiovascular health, there is an association between low vitamin B6 intake with increased blood homocysteine levels and increased risk of cardiovascular diseases, which has been documented in several large observational studies. Vitamin B6, along with folic acid, vitamin B5, vitamin B12 and niacin, is involved in cell metabolism, enhances the immune system, supports the functions of the nervous system, aids in carbohydrate metabolism to produce energy and promotes cognitive health. Vitamin B6 is necessary for the conduction of nerve impulses, regulation of steroid hormones, catabolism of glycogen to glucose, heme synthesis, and the synthesis/ metabolism of amino acids and neurotransmitters.

Prodigy-5 contains: Vitamin B12 is a water-soluble vitamin essential for numerous processes in the body. The richest food sources of vitamin B12 include animal products such as meat, poultry and fish. It is not generally present in plant products with the exeption of peanuts and soybeans which absorb vitamin B12 from bacteria-filled nodules growing on the roots of these plants. Cyanocobalamin is the form most commonly used in supplements but it must be converted into methylcoblamin before it can join the metabolic pool and be properly utilized by the body. Vitamin B12 is also available as methylcobalamin, which is the methylated form, allowing it to become active quicker and be more effective. Vitamin B12 is necessary for countless processes within the body; it transfers methyl groups, plays a part in DNA synthesis and regulation, helps facilitate cell synthesis, maturation and division, helps convert homocysteine to methionine playing a role in cardiovascular protection, aids in the proper functioning of the nervous system, participates in the metabolism of carbohydrates, proteins and fats, helps produce SAMe for mood and cognitive health and also helps produce energy.

Prodigy-5 contains: Vitamin C (Ascorbic acid) is a water-soluble antioxidant essential for human health and life. It has been proven necessary for healthy immune responses, wound healing, non-heme iron absorption (coming from grains and vegetables), reduction in allergic responses, development of connective tissue components such as collagen, and for the prevention of diseases. Vitamin C has also been shown to be important for cardiovascular health, reducing free radicalproduction and free radical damage, and good cognitive health and performance.
Due to human’s inability to produce vitamin C, it is essential to ingest sources containing vitamin C on a regular, if not daily basis. Natural sources of vitamin C include oranges, guavas, peppers (green, red, yellow), kiwis, strawberries, cantaloupes, Brussels sprouts, broccoli, and many other fruits and vegetables.

Prodigy-5 contains: Vitamin D is a fat-soluble vitamin essential for normal growth and development, the formation and maintenance of healthy bones and teeth, and influences the absorption and metabolism of phosphorus and calcium. It is necessary for proper muscle functioning, bone mineralization and stability, and multiple immune functions. Primarily the vitamin D used by the body is produced in the skin after exposure to ultraviolet light from sunlight. Lack of exposure to sunlight, reduced ability to synthesize vitamin D in the skin, age, low dietary intake, or impaired intestinal vitamin D absorption can result in deficiency. Deficiency has been associated with rickets (poor bone formation), porous or weak bones (osteopenia, osteoporosis), pain and muscle weakness, increased risk for cardiovascular disease, impaired cognitive health, and the development and progression of malignant cells (cancer).
Natural food sources of vitamin D are few; these foods are eggs from hens that have been fed vitamin D or fatty fish such as herrings, mackerel, sardines and tuna. Due to low vitamin D levels, countries such as the United States and Canada have opted to fortify foods such as milk and other dairy products, margarines and butters, some natural cereal and grain products.
According to the National Institutes on Health, the average adult should be getting 600IU of vitamin D each day. Individuals with special needs (the elderly, women who are pregnant) may have different requirements and should consult their health professional.

Prodigy-5 contains: Vitamin E is one of the most powerful fat-soluble antioxidants in the body. It has been proven to help promote cardiovascular health, enhanced immune system function, aid in skin repair and to protect cell membranes from damage caused by free radicals. Vitamin E contributes to proper blood flow and clotting as well as cognitive health and function.
Natural sources of vitamin E include herbs such as cloves and oregano, whole grains, nuts and seeds, wheat germ, avocado, egg yolks, and vegetables/fruits such as dark leafy greens, peppers (red, yellow, orange, green), tomatoes, and mangos. Other sources are vegetable oils, margarines, and fortified cereals.

Prodigy-5 contains: Folic Acid is water-soluble vitamin important for many aspects of health. Sources of folic acid include dark, green leafy vegetables such as spinach or asparagus, fortified cereals, orange juice and legumes. Folic acid (folate) must go through a series of chemical conversions before it becomes metabolically active to be properly utilized within the body.
Folinic acid is the highly bioavailable, metabolically active derivative of folic acid and does not require the action of the enzyme dihydrofolinate reductase to become active, so it’s not affected by medicines and herbs that inhibit this enzyme. Adequate folate is necessary for proper DNA and RNA synthesis in regards to fetal growth and development. Due to these effects, the U.S. Public Health Service recommends all women capable of becoming pregnant consume 400 mcg of folic acid daily to prevent neural tube defects.
In addition to its clear effects on fetal growth and development, folic acid also plays an important role in cardiovascular health. By aiding in the conversion of homocysteine to methionine, it has been shown to reduce the levels of homocysteine, a sulfur containing amino acid. In the absence of adequate folic acid levels, homocysteine levels increase and high homocysteine levels are associated with atherosclerosis and the reduced circulation of oxygen and nutrients to the heart, ears and other organs. These results have been documented in countless studies. Folic acid, along with vitamin B6, vitamin B5, vitamin B12 and niacin, is involved in cell metabolism, enhances the immune system, supports the functions of the nervous system, aids in carbohydrate metabolism to produce energy and promotes cognitive health.

Prodigy-5 contains: Vitamin K, a generic term for a group of fat soluble vitamins, are involved mostly in the process of blood clotting, but also needed in metabolic pathways of bones and other tissues. The most well known are vitamin K1, also known as phylloquinone, and vitamin K2, known as menaquinone. Vitamin D and vitamin K work together in bone metabolism and development. Vitamin K works against oral anticoagulants such as warfarin, and excessive vitamin K intake, either through supplementation or a change in diet, can reduce the anticoagulant effect. Vitamin K1 is mainly found in leafy green vegetables (such as spinach, swiss chard and kale), avocado and kiwi fruit; vitamin K2 can be found in meat, eggs, and dairy and is also synthesized by bacteria in the colon. 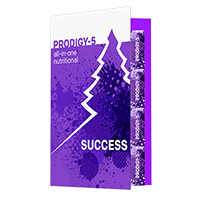 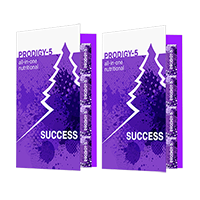 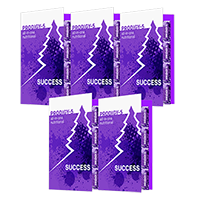